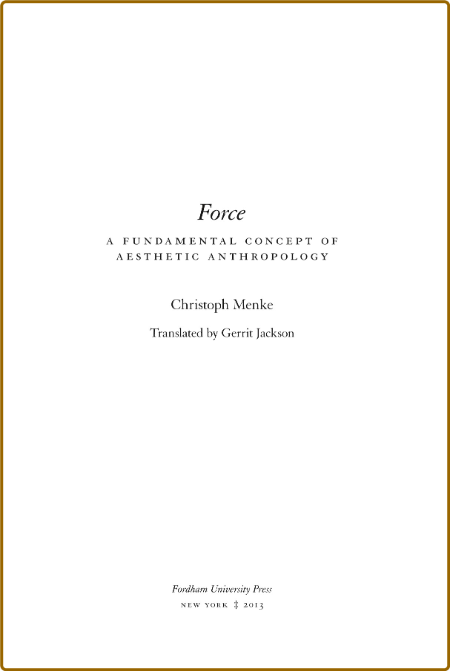 The book aims at a new exposition of the basic idea of modern aesthetics by way of a reconstruction of its genesis in the 18th century, between Baumgarten's Aesthetics and Kant's Critique of Judgment. The claim is that the historical invention of aesthetics was not about expanding the range of legitimate objects of philosophical inquiry―these objects all existed before aesthetics. Rather, aesthetics, by introducing the category of the "aesthetic," fundamentally redefined these objects. But most importantly, the reconstruction of the historical genesis of aesthetics shows that the introduction of the category of the "aesthetic" required nothing less than a transformation of the fundamental terms of philosophy. What begins in―or as―aesthetics is modern philosophy.
More precisely, Force shows that in―or as―aesthetics modern philosophy began twice, in two different, even opposite forms. On the one hand, Baumgarten's Aesthetics is organized around the new concept of the "subject": the concept of the subject as the totality of faculties, as the agent defined by his capabilities; of the subject as one who is able. By conceiving sensible cognition and (re)presentation as the exercise of subjective faculties acquired in practice, Baumgarten has framed the modern conception of human practices (and of philosophy as the inquiry into the conditions that enable the success of these practices). That is why aesthetics, the reflection upon the aesthetic, is a central pillar of modern philosophy: in aesthetics, the philosophy of the subject or of the subject's faculties assures itself of its own possibility.
Yet here, in the aesthetic and the reflection on it, the aesthetics "in the Baumgartian manner" (Herder), as the theory of the sensible faculties of the subject, at once faces a different aesthetics: the aesthetics of force, which conceives the aesthetic not as sensible cognition but instead as a play of expression―propelled by a force that, rather than being exercised, like a faculty, in practices, realizes itself; a force that does not recognize or represent anything because it is "obscure" and unconscious; a force not of the subject but of man as distinct from the same man as subject. The aesthetics of force is a science of the nature of man: of his aesthetic nature as distinct from the culture, acquired by practice, of his practices.
That is the hypothesis the six chapters of Force intend to unfold. The first chapter, analyzing the rationalist concept of the sensible, recollects the point of departure of aesthetics: the sensible is that which is without determinable definition or measure. The second chapter reconstructs Baumgarten's aesthetics of sensible cognition as a theory of the subject and its faculties. The third and fourth chapters draw on writings by Herder, Sulzer, and Mendelssohn to develop the basic motifs of a counter-model, an aesthetics of force: the aesthetic, as the operation of an "obscure" force, is a performance without generality, divorced from all norm, law, and purpose―a play. And the aesthetic, as the pleasure of self-reflection, is a process of the transformation of the subject, of its faculties and practices―a process of aestheticization.
The aesthetics of force founds an anthropology of difference: between force and faculty, between man and subject. The two concluding chapters explore the consequences: for the idea of philosophical aesthetics; and for ethics as the theory of the good. The fifth chapter engages Kant to show that an aesthetics conceived as an aesthetics of force is the scene of an irresolvable contention: aesthetics unfolds within philosophy the contention between philosophy and aesthetic experience. The sixth chapter draws on Nietzsche to demonstrate the ethical import of aesthetic experience as the experience of the play of force: it teaches us to distinguish between action and life; it teaches the other good of life. – "The last word of aesthetics is human freedom."