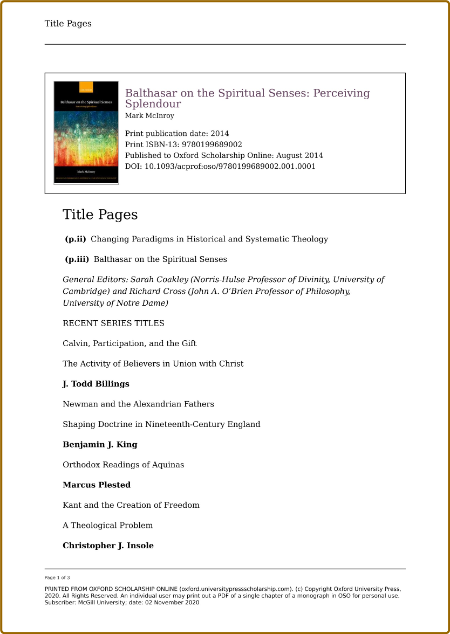 In this study, Mark McInroy argues that the 'spiritual senses' play a crucial yet previously unappreciated role in the theological aesthetics of Hans Urs von Balthasar. The doctrine of the spiritual senses typically claims that human beings can be made capable of perceiving non-corporeal, 'spiritual' realities. After a lengthy period of disuse, Balthasar recovers the doctrine in the mid-twentieth century and articulates it afresh in his theological aesthetics. At
the heart of this project stands the task of perceiving the absolute beauty of the divine form through which God is revealed to human beings. Although extensive scholarly attention has focused on Balthasar's understanding of revelation, beauty, and form, what remains curiously under-studied is his
model of the perceptual faculties through which one beholds the form that God reveals. McInroy claims that Balthasar draws upon the tradition of the spiritual senses in order to develop the means through which one perceives the 'splendour' of divine revelation.

McInroy further argues that, in playing this role, the spiritual senses function as an indispensable component of Balthasar's unique, aesthetic resolution to the high-profile debates in modern Catholic theology between Neo-Scholastic theologians and their opponents. As a third option between Neo-Scholastic 'extrinsicism', which arguably insists on the authority of revelation to the point of disaffecting the human being, and 'immanentism', which reduces God's revelation to human categories in
the name of relevance, McInroy proposes that Balthasar's model of spiritual perception allows one to be both delighted and astounded by the glory of God's revelation.