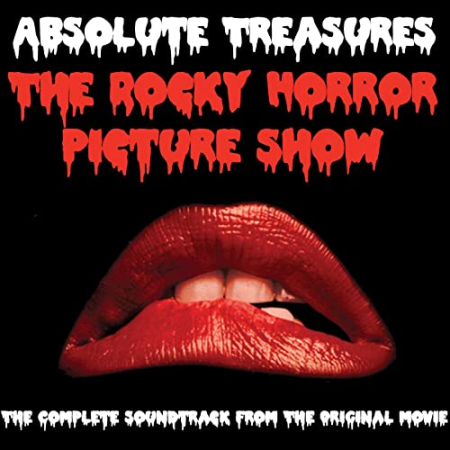 Absolute Treasures' is the expanded reissue of the soundtrack for the 40th anniversary of the 1975 cult musical film 'The Rocky Horror Picture Show' starring Tim Curry, Susan Sarandon, and Meat Loaf. The album includes ALL songs from the film (on CD as well as vinyl) for the first , including 'Planet Schmanet Janet,' 'Once In A While,' 'The Sword of Damocles,' and 'Planet Hot Dog!' For the 1975 film version of The Rocky Horror Picture Show, American producer Lou Adler wisely mixed the best of the London and Los Angeles stage versions, shooting the movie in England with Tim Curry and several of the other original cast members, plus Meatloaf (years before Bat Out of Hell), and Americans Barry Bostwick and Susan Sarandon as the innocent couple Brad and Janet. Adler also brought back original London stage musicians in place of the slick studio musicians who had marred the L.A. cast album. The film version resequenced the songs and reassigned some of the vocals, with Brad's song 'Once in a While' dropped. But it all worked out fine. The strings that were added to ballads like 'Science Fiction/Double Feature' only improved them; the rockers rocked out; Bostwick and Sarandon proved to be the best Brad and Janet ever; the original cast members, especially Curry, revelled in the opportunity to immortalise their portrayals; and Rocky Horror's potential as a witty parody of cheap movies, rock & roll, and sexual mores was fully realised. The original film soundtrack album became the definitive version of the score, despite lacking songs such as 'Planet Shmanet Janet' and 'The Sword of Damocles'....until now!! The Rocky Horror Picture Show was not successful in its initial theatrical run, but then a strange thing happened. In 1976, the Waverly Theater in New York's Greenwich Village began showing the film at midnight on Fridays and Saturdays. Soon, a cult of repeat viewers began turning up every week; they began to dress like the characters, call out their own comments at strat moments, sing along, and add their own theatrical effects. The phenomenon spread across the U.S., with fans rivaling Trekkies and Deadheads for loyalty and eccentricity, and The Rocky Horror Picture Show took on a life Richard O'Brien never could have anticipated.