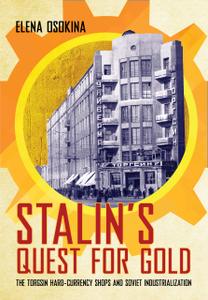 Stalin's Quest for Gold: The Torgsin Hard-Currency Shops and Soviet Industrialization
English | ISBN: 1501758519 | 348 pages | EPUB | September 15, 2021 | 7.31 Mb
Stalin's Quest for Gold tells the story of Torgsin, a chain of retail shops established in 1930 with the aim of raising the hard currency needed to finance the USSR's ambitious industrialization program. At a time of desperate scarcity, Torgsin had access to the country's best foodstuffs and goods. Initially, only foreigners were allowed to shop in Torgsin, but the acute demand for hard-currency revenues forced Stalin to open Torgsin to Soviet citizens who could exchange tsarist gold coins and objects made of precious metals and gemstones, as well as foreign monies, for foods and goods in its shops.

Through her analysis of the large-scale, state-run entrepreneurship represented by Torgsin, Elena Osokina highlights the complexity and contradictions of Stalinism. Driven by the state's hunger for gold and the people's starvation, Torgsin rejected Marxist postulates of the socialist political economy: the notorious class approach and the state hard-currency monopoly. In its pursuit for gold, Torgsin advertised in the capitalist West, encouraging foreigners to purchase goods for their relatives in the USSR; and its seaport shops and restaurants operated semilegally as brothels, inducing foreign sailors to spend hard currency for Soviet industrialization. Examining Torgsin from multiple perspectives―economic expediency, state and police surveillance, consumerism, even interior design and personnel―Stalin's Quest for Gold radically transform