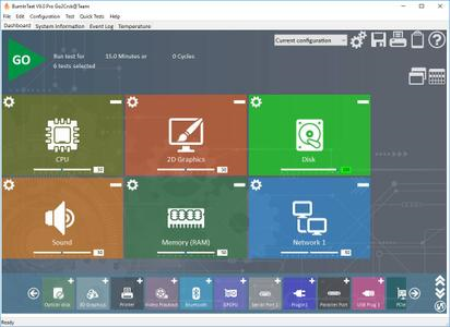 PassMark BurnInTest is a software tool that allows all the major sub-systems of a computer to be simultaneously stress tested for endurance, reliability and stability.

Anyone who has used computers for any period of will understand the importance of having a stable system.
The cost of a hardware failure can be enormous. If you are lucky your data will only become inaccessible while faulty components are replaced. If you're unlucky you can lose your files completely or have them permanently corrupted. Even if you have good backups, you can still lose days of work returning the PC to its pre-failure state. In many cases the lost data can never be replaced and businesses can be brought to their knees, with the loss of documentation, customer details and financial records.
BurnInTest will bring intetent or hidden problems to the surface so that after a successfully run the computer can be used with a much higher level of confidence. BurnInTest can also be used by overclockers to verify system stability at high clock speeds.
Assists in PC Troubleshooting and diagnostics.
Avoid delivering dead on arrival and faulty hardware to your customers.
Dramatically reduce your test s with simultaneous testing.
Build your image as a supplier of quality systems.
Avoid costly down, system rebuilds and lost data.
Test the stability of a system after configuration changes or hardware upgrades (critical for overclocking and system upgrades).
The hottest, fastest CPU Burn In tool around! (Heat testing)
Integrates with the PassMark Management Console Web server application for centralized storage of test results.
Testing for hardware problems
Just press the start button and have BurnInTest test your system hardware.
BurnInTest thoroughly exercises the hardware in Windows based servers, desktops, laptops and tablets* in a short period of , in the same way as normal applications use a PC over a long period of . This takes advantage of the fact that computer hardware tends to fail either very early in its life or after many thousands of hours of use. Typically BurnInTest should be used before a system is put into service or after a system upgrade.
BurnInTest tests the CPU, hard drives, SSDs, RAM, optical drives (CD, DVD and Blu-ray), sound cards, graphics cards (GPGPU, Video RAM, 2D graphics, 3D graphics and video playback), network ports and printers.
The Professional version also has a number of additional tests including microphones, webcams, battery's, tape drives, USB ports (USB 3.0 and 2.0), Serial ports and Parallel ports (with the use of loop back plugs).
If you have specialized hardware that BurnInTest does not test out of the box, you can write your own test and integrate it with BurnInTest. For example, PassMark has produced plugin tests for Touchscreens and Keyboards*.
This can all be done simultaneously as the application is multithreaded, making BurnInTest the fastest test around.
An easy to use interface. Configure, Run, Pass or Fail, Results report;
The ability to select the level of load placed on each component;
The ability to set detailed test parameters if and when required;
d test runs that will stop automatically at the expiry of the selected or after a number of test cycles;
Support for production line automation;
Can be run from a disk drive, USB drive or optical disk (under Windows);
Can be made into a bootable solution from a USB drive, optical disk or PXE boot (with PassMark WinPE Builder);
Testing of up to 256 CPUs simultaneously;
Testing of up to 32 memory modules simultaneously;
Testing of up to 50 disk drives simultaneously;
Support for SMART hard disk parameter checking;
Testing of up to 20 optical drives simultaneously;
CD / DVD / Blu-Ray read testing using specialized optical test media, plus CD/DVD burner testing;
Testing of up to 8 graphics cards (GPGPU test) simultaneously;
Testing of up to 20 network ports simultaneously;
Testing of up to 25 USB ports simultaneously;
Windows shutdown and cyclic reboot testing (with complementary Rebooter software);
Scrolling 'H's for Electromagnetic Compliance (EMC) testing to ANSI standard C63.4-1992;
Native 32-bit and 64bit hardware and O/S support;
Online help & PDF manual.
Windows Vista, Windows 7, Windows 8, Windows 10, 2003 Server, 2008 Server, 2008 R2 Server, 2012 Server, 2012 R2 Server (64-bit only)
Requirements: 256 MB RAM, DirectX 9.0c, DirectX 11 for GPGPU tests, 225MB disk space (more required to run the disk test). Hardware loopback plugs for port testing (Professional Edition only).