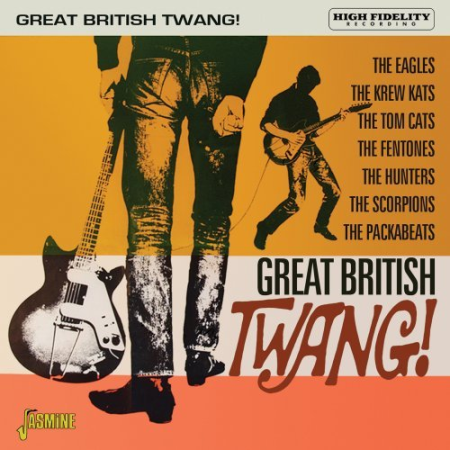 The 'Golden Age' of the twangy UK Beat Instrumental occurred between the late 1950s and the very early 1960s, inspired by The Shadows' spectacular successes.

This compilation presents thirty-four tracks from six guitar-led groups, whose sound and style were pretty much a direct homage to The Shads.

First up, we have The Eagles, from Bristol, who racked up airplay with 'Bristol Express' and 'Exodus', followed by The Krew Kats, aka Marty Wilde's former Wildcats (they also recorded as The Tom Cats), who charted with 'Trambone'.

The Fentones, who also backed Shane Fenton, charted with 'The Mexican' and 'The Breeze And I', while The Hunters weighed in with 'Teen Scene' and 'The Storm'/'How's M'Chicks' two huge collectors' items.

Finally, The Scorpions cut two equally-collectable 45s, '(Ghost) Riders In The Sky' and 'Rockin' At The Phil', while The Packabeats charted with 'Gypsy Beat', before famously cutting 'The Traitors' for Joe Meek.

04 Eagles - The March of the Eagles

17 The Fentones - The Breeze and I

18 The Fentones - Just for Jerry

27 Scorpions - (Ghost) Riders in the Sky

29 Scorpions - Rockin' at the Phil

33 The Packabeats - Evening in Paris